This is why they want to do everything they can to stop Bitcoin.  But, they can’t…
Submitted by Jeff Berwick:

With bitcoin attaining new highs and a market capitalization of over $14 billion it is interesting to consider how it compares to all the government, central bank backed fiat currencies in the world.

The worldwide terror network, the CIA, of course monitors money very closely and has a comprehensive list of each currency’s total money stock available.

With bitcoin currently having a total money supply worth more than $14 billion US it now has a larger value than the money of 124 countries.

Countries including Malta, Estonia, Croatia, Guatemala and the Dominican Republic and over a hundred more. 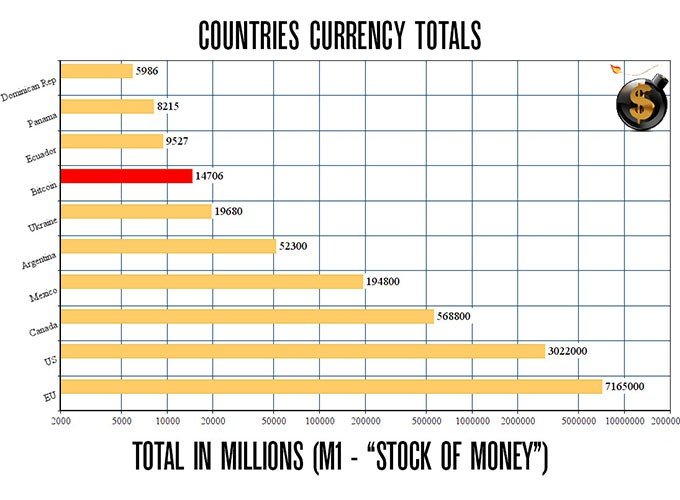 This is quite significant for a currency that originally started on just one man’s computer eight years ago and has had nearly every major government and central bank in the world try to do everything they can to stop it.

Yet, they can’t.  It doesn’t exist anywhere.  There is no bitcoin company to regulate nor any bitcoin CEO to arrest.

That’s the beauty of it… and why it is so popular!

Unlike governmental, fiat, centrally banked piece of paper with dead criminals printed on it, bitcoin has real value to people.

In a world where central banks inflate their currencies into worthlessness over time and impose 0% or negative interest rates and make their money worthless overnight, like in Venezuela and India recently, people are beginning to realize just how valuable bitcoin is.

There is no old bureau-rat, like Janet Yellen, who can sit down in front of a microphone every few months and dictate the value of bitcoin.  Nor can she print as much money as she wants and give it to all her crony friends.

Nor can any government print up as much bitcoin as they want to rage endless wars.  As Ron Paul said, “It is no coincidence that the century of total war coincided with the century of central banking.”

As we approach Christmas, and many talk of “peace on Earth”, not many know that bitcoin could be what brings it.

While there is talk of the US dollar going “up” or the Euro going “down”, the fact of the matter is that all fiat currencies ALWAYS go down.  They are all inflated nearly constantly which reduces the value of each unit.  So, even when the fake news says the US dollar is going up, it’s not.  It’s just not declining in value compared to other declining currencies.

This is what the chart of a currency that doesn’t inflate massively looks like.

If bitcoin were used as the entire world’s money people would have to work far less just to keep up with the constant inflating of the currency.  And, they wouldn’t even need to worry about their bank speculating with their money, and losing a lot of it, like in 2008… because bitcoin itself is a bank.  You are your own bank.

Barack O’Bomber, as stupid as he is, even alluded to the power of bitcoin, when he lamented, “Everybody is walking around with a Swiss bank account in their pocket.”

In fact, Barack, your “job” of being President probably wouldn’t even exist and you’d have to go back to community organizing with your commie friends in the hood.

That’s why they want to do everything they can to stop it.  But, they can’t.